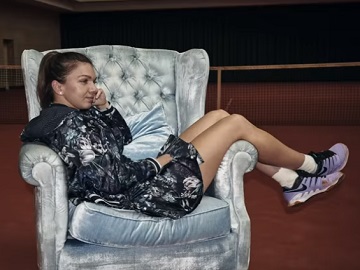 Nike has released a new ad featuring tennis champion Simona Halep to remind people that “You are never too small to dream big” .

The Romanian tennis player (number 3 WTA) stars in a 90-second spot for the sports brand (that became her sponsor last year) and shares her story about how she was laughed at when she told the world, as a child, that she wanted to be the best in tennis.

“Everything can be done if you have a big heart and if you believe in yourself. My name is Simona Halep. I was born in Constanta (Romania). When I was a kid, many critics told me that I am too small and I will never be a champion.
But the critics make me upset on (the) court and more motivated. (They) made me more focused and concentrated on what I have to improve during the game, with my size. Always I say “Thank you”. Instead of having a comment about the critics, I prefer to silence myself. I prefer the facts (more) than the words. I always had crazy dreams. I always had in my head that I want to be the best in tennis. I think the heart is more important than the body size.

I think you have to be always as you are. We don’t realize how capable we are to do great things. If I was able to leave from this country to get to number one in the world, means that everything is possible,” Simona says in voiceover.

The commercial, part of Nike’s “Dream Crazier” campaign, ends with the message “You’re never too small to dream big” handwritten by Simona flashing across the screen.

Halep signed a deal with Nike in 2018, after playing without a sponsor in Melbourne, where she wore a red unbranded dress.

She was also without an official apparel sponsor when she won the Shenzhen Open in January 2018. Thus, the Romanian champion replaced Adidas (the brand with which she had been for four years) with Nike.