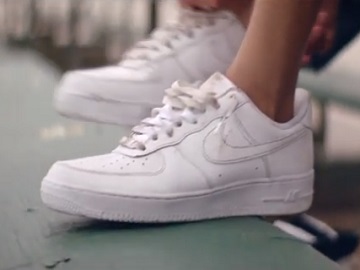 Foot Locker has released a new commercial, highlighting that the Nike Air Force 1 “Moss Point” by Devin Booker is available now at House of Hoops and Footlocker.com.

The 30-second spot, entitled “The Sun of Moss Point,” tells the story of Devin Booker who, on the court, wears socks, but off the court, he doesn’t. The Phoenix Suns small forward is featured as a teenager at Moss Point High School, who’s training both on the court and off the court and receives advice from his trainer. “You gotta have confidence, you want someone else to take your spot?” “You gotta be disciplined, and even when you step off the court, you gotta wear some socks,” the latter tells Booker.

“Is this whole movie about shoes and socks?” an onscreen line reads as the commercial comes to its end. Booker’s limited-edition Air Force 1, designed to be worn without socks, is then introduced, with another line informing that it is now available for purchase.

The Air Force 1 Low shoes feature a barely grey base and moon particle lining around the lace holes and the heel.

The heel tab includes an embroidered “No Sir,” and they also come with a hang tag that reads “D-Book”. Inside the shoes, the sole reads “Devin Booker’s signature no socks style – Always fresh” and another tag on the tongue reads “Made in Moss Point” – a reference to Booker’s high school career at Moss Point High School in Moss Point, Miss.