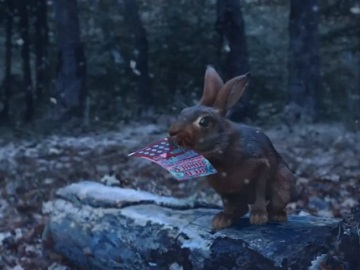 The spot, titled “Special Delivery,” opens with a woman working as a park ranger who receives a Red Riches scratch-off game from her boss as a holiday gift and goes on with her putting it into her bag and driving away, back to her house. On the way, the wind blows the scratch-off game away, but several animals set out on a mission to take it back to her. A rabbit, a bird, a turtle and a deer and a raccoon, all team up to deliver the gift to her front door just in time for Christmas.

“Believe in the magic of the season,” an onscreen line reads at the end of the commercial.