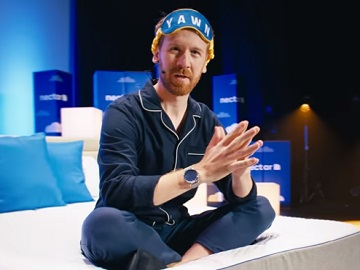 The spot, produced and developed by Brooklyn, NY-based creative content agency Mustache (part of Cognizant Interactive), introduces motivational sleeper Yawn Yawnson, who is the first-ever hype man for sleep. Standing in front of a large audience, he praises the power of a good nap and declares that “there are no bad sleepers, there are only bad mattresses.” He also brings audience members on stage to let them try Nectar, a memory foam mattress that ensures “unrivalled comfort”. Those who have already tried the mattress are delighted by its effect on their sleep. One of them says that, when he got his 365-night trial from Nectar, he slept for a whole year, another one reveals that, with the brand’s Forever Warranty, he went from looser to snoozer, and another one says that, with free shipping and free returns from Nectar, he’s a “Bedhead” now.