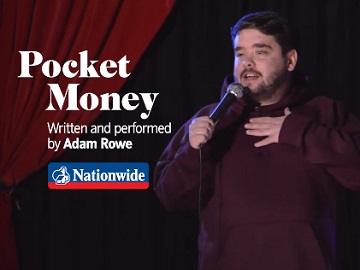 Nationwide Building Society has launched a new campaign, entitled “PayDay SaveDay” and aimed at encouraging people to start putting a little bit aside on the day they’re paid.

The campaign includes several spots featuring stand-up comedians Adam Rowe, Helen Bauer, Sunil Patel, and Masie Adam as they perform on stage short bits about being bad with money. Using examples from their own lives, they manage to make the people in front of them, without sounding patronising and parent-like, to consider saving. In one of the videos, dubbed “Pocket Money,” Rowe talks about how he gets interest on his money. “Do you know when you don’t wear a jacket for a year and then you find a fiver in it?” he asks the audience. “That’s my version of getting interest. It’s my money I’ve just forgotten about it,” he adds.

“There is a better way to save, do it on the day you’re paid,” a final onscreen line reads.

The adverts are set run across TV, radio, newspapers and posters.