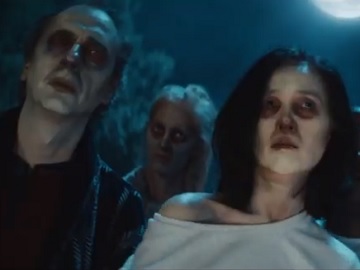 The 30-second spot features Mr. Mucinex showing up at a young woman’s front door, followed by a group of zombies. The green mascot tells the woman, named Cindy, that her cold will keep her up all night and the next day she’s gonna be a zombie. Cindy replies she’s taking a new nightime cold medicine, the new Mucinex Nightshift Cold & Flu, which fights her worst symptoms she could sleep great and wake up human. While Mr. Mucinex concludes that she doesn’t want to be a zombie, Cindy goes back inside and shuts the door, leaving him the target of the zombies. “I taste terrible,” he says trying to protect himself from the attack.

The commercial ends with the voiceover saying that the new Mucinex Nightshift Cold & Flu is uniquely formulated to fight your worst symptoms so you can sleep great and wake up human”.