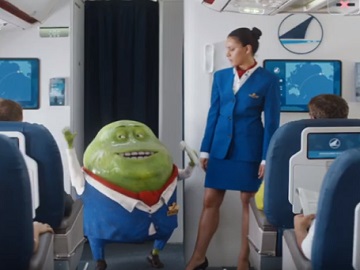 The 30-second spot features Mr. Mucus on a plane, standing near Kim, a flight-attendant, saying that she’s demonstrating a congestion. The woman tells him that she had upgraded to Mucinex and when the mascot points out that they still have 12 hours to Australia, she replies that Mucinex lasts 12 hours, so she’s good. When she tries to get the phone back, Mr. Mucus takes hold of it, saying he wants to talk, but Kim informs him he’s reached his final destination, pushes him into the toilet, and flushes.

“Only Mucinex has a patented tablet that lasts three times longer for 12 hours,” the voiceover says at the end of the ad.