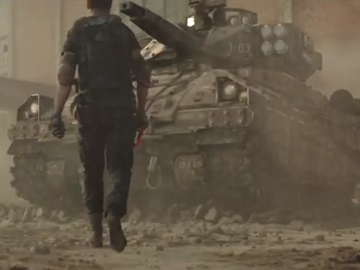 The brands have joined forces with the famed franchise and, as part of the program, players will be able to unlock in-game rewards inside Modern Warfare with the purchase of any participating MTN DEW AMP GAME FUEL, MTN DEW or DORITOS products, simply by entering unique codes found on the packaging.

Published by Activision and developed by Infinity Ward, Call of Duty: Modern Warfare, which delivers an epic re-imagining of one of the most iconic and thrilling video game properties in history, was released on October 25. From October 6 through December 31, Modern Warfare gamers will be able to unlock 2XP with codes found on participating DORITOS packs, MTN DEW and DIET MTN DEW as well as MTN DEW AMP GAME FUEL re-sealable cans.

The ad that illustrates this idea, titled “Faceoff,” features a game character who drinks MTN DEW AMP GAME FUEL and, asked by enemies if he has any last words, tells them they’re all on his parking spot. The armed men start laughing, but not for long as a military tank falls from above on the spot they were standing.

It has also been announced that, with the first purchase of select MTN DEW AMP GAME FUEL coded products, which are available across select retailers, gamers will receive their own #VictoryInACan – with access to an exclusive operator skin. Packaging will also display sleek Call of Duty: Modern Warfare inspired graphics.