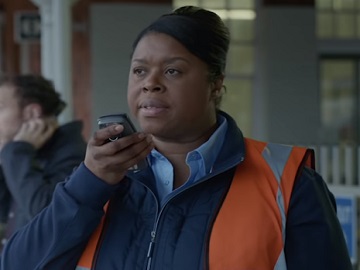 M&S has released a new advert for the M&S Food, highlighting that “This is not just food,” but “delicious food that gets everyone around the table,” “for the whole family to enjoy”.

The 60-second spot features several people in various everyday situations who, noticing M&S food, start daydreaming about eating it. A worker announcing the next train on a platform interrupts herself when she sees, on a billboard in front of her, “succulent M&S Scottish salmon, perfectly pan-seared,” a sales rep in a store who presents an ultra HD TV to a young family can’t continue his speech after seeing on the TV a trifle, which he describes as “the best ever from M&S,” with fruity compote and tonnes of vanilla custard. A woman walking her dogs on a rainy day shares her impatience to get home to eat her favorite food, another woman is ready to indulge herself with cauliflower bubbling in mature cheddar sauce, a man praises his Detroit-style pizza with smoky sausage and pulled pork bits and a three-cheese combo, and another man, who’s welcoming his girlfriend for dinner, presents the dish as “more than salmon,” “M&S salmon drizzled in a rich Hollandaise sauce”. “This is not just food. This is M&S Food,” he also says, before urging her to “dig in”.

The advert ends with the tagline “This is not just food. This is M&S Food” flashing across the screen.

The retailer provides, on its website, in the “Not Just Any Food” section, a list of 20 picks, available in store, that could become your new favourite, tasty Easter treats for the whole family to try, delicious seasonal produce, as well as lots of ideas and inspiration, great deals and more.

M&S also highlights that you can now make Easter entertaining easy with its fuss-free online Food to Order service, which allows you to have delivered to your door a variety of meals, from family roasts to desserts, plus plenty of veggie options.