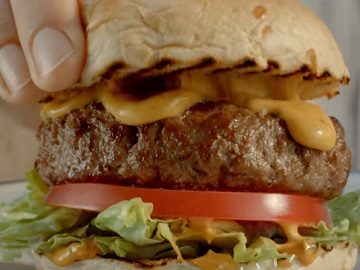 M&S continues its “This is not just food, this is M&S Food” campaign with a new advert, featuring the cheesy melt M&S Best Ever Burgers.

The 30-second spot opens with a young man sitting at a table, on the beach, asking his partner what he’s making in the small wooden house they have accommodation in. The latter answers he’s making the M&S best ever burgers, “made with selected cuts of British beef, with a hint of bone marrow, topped with a special cheesy melt.” “These are not just burgers,” he also says, specifying that those are cheesy melt M&S Best Ever Burgers “for the cheesiest date ever”.

The advert ends with the guy’s partner saying “You had me at burgers” and with the tagline “This is not just food. This is M&S Food” flashing across the screen.

A previous installment in the “This is not just food, this is M&S Food” campaign features several people in various everyday situations who, noticing M&S food, start daydreaming about eating it. A worker announcing the next train on a platform is absorbed by the “succulent M&S Scottish salmon, perfectly pan-seared” showcased on a billboard, a sales rep in a store can’t continue his speech after seeing on the TV a trifle with fruity compote and vanilla custard, which he describes as “the best ever from M&S,” a woman is ready to indulge herself with cauliflower bubbling in mature cheddar sauce, a man praises his Detroit-style pizza with smoky sausage and pulled pork bits and a three-cheese combo, and another man, who’s welcoming his girlfriend for dinner, presents the dish as “more than salmon,” “M&S salmon drizzled in a rich Hollandaise sauce”.

The retailer provides, on its website, in the “Not Just Any Food” section, a list of 20 picks, available in store, that could become your new favorite, delicious seasonal produce, as well as lots of ideas and inspiration, great deals and more.