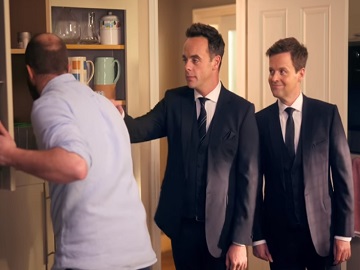 M&S advertises its Britain’s Got Talent Bonanza meal deal in a new spot, urging you to enjoy the ultimate family feast with six tasty treats for just £10.

The 30-second ad features a father asked by his wife and his kids, who are on the couch, in the living room, watching Britain’s Got Talent, when is dinner. He goes to the kitchen, but he doesn’t find anything. Luckily, Declan Donnelly and Anthony McPartlin show up and bring him an M&S Britain’s Got Talent bonanza deal, which he takes to his family as if he were in a talent show, as well, and the tray was his performance. “We don’t like it, we love it,” is the reaction of his family, who hit the golden buzz.

The advert ends with the voiceover saying the tagline “This is not just food. This is M&S food”.

The bonanza deal, which includes a variety of options, from thin and crispy ham and pineapple pizza to moreish sweet potato fries, sticky barbecue chicken wings, garlic mushrooms, crunchy coleslaw, salads, as well as sweet treats, such as cornflake mini bites and chocolates, is available in store from May 27 through Sunday, June 4. Britain’s Got Talent grand final will be taking place on Sunday, June 2.