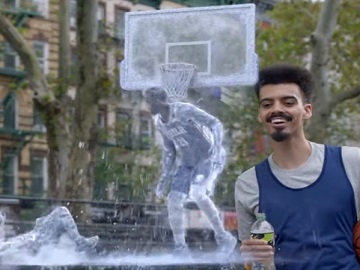 The spot, set on a community basketball court, opens with Bach taking a deep drink of Mountain Dew Ice and producing, thanks to his cold breath, a quick-dribbling icy player. His fellow, who’s been watching “the show,” doesn’t seem impressed at all. After taking a drink of Mountain Dew Ice, the latter “brings over,” upon exhaling, Philadelphia 76ers center Joel Embiid, who throws Bach’s player to the ground. “Get up, you’re embarrassing us,” Bach tells his player, who doesn’t seem able to do that, though. Embiid, on the other hand, runs toward Bach’s friend and, giving him high-five, tells him “Welcome to the block party!”.