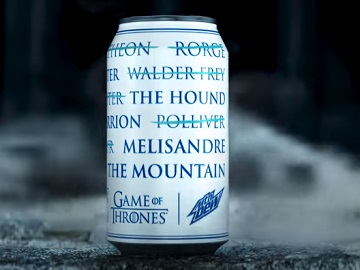 Mountain Dew has launched a new ad campaign, titled “A Can Has No Name,” introducing a special limited edition can that reveals everyone on Arya’s kill list.

The iconic green can has been replaced, thus, by a brandless can that will not be available for public purchase, but will be the prize in the brand’s “For The Throne” Sweepstakes. “Sometimes winning it all means sacrificing everything. A can must become no one. So we did. Now it’s your turn. Want a chance to claim your limited edition @GameofThrones Mtn Dew?” the brand wrote on social media, announcing that the promotion ends 3/29/19. Participants must leave a message on the brand’s Instagram or Twitter page and let them know what they would sacrifice for one of these cans, with the hashtags #ACanHasNoName and #ForTheThrone. Winners will then be shipped a “A Can Has No Name” for their own.

It will also be possible to get your hands on a limited edition Game of Thrones Mtd Dew can via a scavenger hunt set to take place in both New York and LA.

The campaign also includes a video of Philadelphia 76ers player Joel Embiid siping the drink on the throne.
The final season of Game of Thrones airs April 14 on HBO.