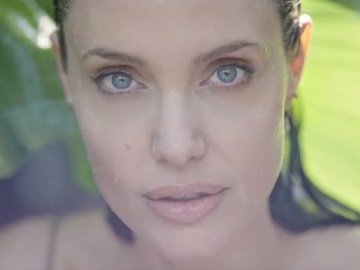 Directed by Oscar-winning cinematographer Emmanuel Lubezki, the campaign film features the actress showing off her tattooed back at her home in Cambodia. She is also seen in the rural surroundings of her Cambodian home, enjoying the rain and the new Mon Guerlain Intense.

The soundtrack music is the 1966 single “Wild Thing” by the English rock band The Troggs, from their debut album, “From Nowhere”. The song, written by American songwriter Chip Taylor, was originally recorded and released by the American rock band the Wild Ones in 1965.

Guerlain celebrated the launch of its new fragrance last month, on July 8-9, in Paris, at the Hôtel de Crillon.

Angelina Jolie, who has been the muse of Mon Guerlain since 2017, attended the event, as well. On this occasion, she spoke about her connection to Maison Guerlain and the work of the foundation she set up in 2003 in Cambodia to help local communities access healthcare and education and preserve the environment.