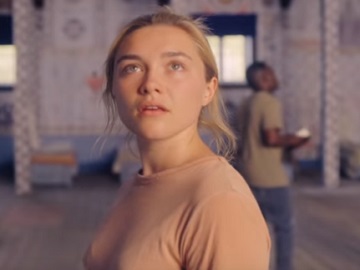 A24 has released a first teaser trailer for the upcoming thriller Midsommar, set to hit theaters this summer.

Written and directed by Ari Aster, director of Hereditary, the film follows a young couple who travel to Sweden to visit their friend’s rural hometown for its fabled mid-summer festival. “What begins as an idyllic retreat quickly devolves into an increasingly violent and bizarre competition at the hands of a pagan cult,” according to the official synopsis.

The teaser opens with Pugh’s character going, together with a group of youngsters, to a remote place located in a forest area, where they are supposed to attend a “crazy nine day festival” that “only happens every 90 years,” according to Reynor’s character, Christian, whose voice is heard in background. Scenes that seem from another time, with dozens of people forming a sort of corridor for someone to walk down to some sort of altar, are juxtaposed with scenes from the contemporary time, when Pugh’s character realizes that things are about to go awry.

Midsommar is scheduled to be released on August 9, 2019.