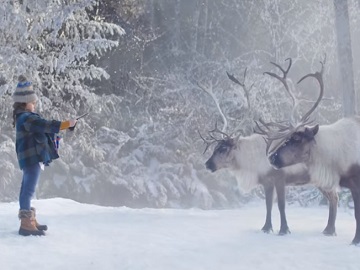 The spot, created by McCann and aimed at highlighting that Microsoft technology empowers and connects almost everyone on the planet, features Lucy, a curious 6-year-old who, after seeing her mother using her Surface and Microsoft Translator to communicate with some Japanese colleagues, comes up with the idea of using it to communicate with some guests: two reindeer. The little girl takes to opportunity to flood her four-legged friends with questions after grabbing the tablet and taking it with her, outside, into the snow. Thus, she wants to know how they fly, what Santa does in the summer, what his sleigh is made of, if Mrs. Claus is a good cook, if they get presents, and more.

“Happy Holidays in 60+ languages. Reindeer isn’t one of them. Yet.” onscreen lines read at the end of the commercial.