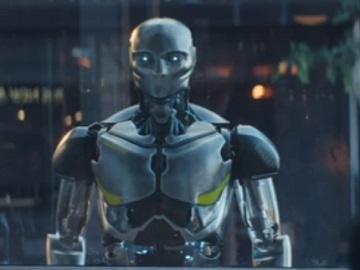 Michelob Ultra highlights, in its commercial for this year’s Super Bowl, that “staying fit is only worth it, if you can enjoy it”.

The 30-second spot features several robots as they practice various sports among humans, such as jogging, golf, box, and spinning, and going to extremes – from running extremely fast, to hitting dozens of golf balls per minute, to destroying the box sack to cycling at an incredible speed, that no one else can. As the ad comes to its end, a robot is seen walking down the sidewalk and taking a look into a bar, where Maluma and his friends are enjoying a beer (Michelob ULTRA, obviously). Seeing the look on their faces, it suddenly strikes him that “It’s only worth it, if you can enjoy it”.

The ad also informs that this superior light beer has no artificial colors or flavors, and only 2.6 carbs and 95 calories.

Last year, the brand also celebrated an active, balanced lifestyle with a Super Bowl ad that featured actor Chris Pratt as an overconfident actor under the delusion that he’s the most important player in an upcoming Super Bowl ad.