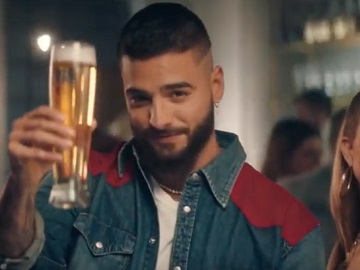 Michelob markets its Michelob ULTRA as “a superior light beer that goes with our rhythm,” in a new commercial that features a special appearance from global superstar Maluma.

“That rhythm you feel? That’s our rhythm. It’s in everything we do,” the voiceover says at the beginning of the 30-second spot, which features a group of youngsters on the dance floor, one of them with a Michelob ULTRA in his hands. The voiceover then continues to talk about rhythm, while on screen various other people, including Maluma, who is seen showing off his juggling skills, writing a song and recording it in the studio, then enjoying a Michelob ULTRA in a bar, in the company of his friends.

“It’s in our music. It’s in our feet. It is definitely in our hearts. That rhythm of ours is always moving forward.
Dreaming. Creating. Sharing. It’s a rhythm that never stops. And we need a beer that keeps up with it,” the voiceover also says, adding, at the end of the spot, the tagline “Michelob ULTRA. Super light beer that goes with our rhythm”.

Maluma is among the latest celebrities enlisted by the beer brand to pitch its beer. In its first commercial for this year’s Super Bowl, Michelob featured the Colombian singer enjoying a beer with his friends, in a bar, while one of the robots that live among humans is watching the group through the window, from the sidewalk, and realizes that “It’s only worth it, if you can enjoy it”.

Michelob has also tapped Zoë Kravitz, for its second commercial for this year’s Super Bowl, to introduce Michelob ULTRA Pure Gold, a USDA Certified Organic Light Lager with 2.5 carbs and 85 calories. The ad, created by agency FCB Chicago and directed by Emma Westenberg, features the actress against a stunning landscape, whispering a message about the Michelob ULTRA Pure Gold in the hopes to trigger ASMR (autonomous sensory meridian response) for viewers.

In the past, the brand has also collaborated with Chris Pratt.