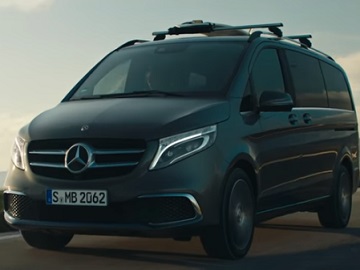 Mercedes Benz showcases the Mercedes-Benz V-Class 2019 in a new commercial, that encourages people to make their move.

The 60-second spot tells the story of model and surfer Francisco Cipriano, who – at the age of 40 – quit his office job and took his own destiny by the horns. “When I was born, I was 40 years old,” Cipriani says in voiceover at the beginning of the video. Today, working as a model, he remembers the times he had to work shifts in his father’s barber shop, after school. He also recalls what his father always said, “Work hard until you are the man you deserve to be,” as well as the moment he realized, at 40 years old, that there was a whole new exciting life waiting for him out there. “I finally understood what my father meant,” he says, while on screen he is seen driving the Mercedes-Benz V-Class to the ocean to ride the waves as a surfer and on various sets to work as a model.

“It’s been quite a long path. From a boy at his father’s barber shop to the man I am now. My name is Francisco Cipriano and I keep moving,” Cipriano says at the end of the video, which also sees the tagline “Make your Move” flashing across the screen, as well as the new V-Class speeding down a road.