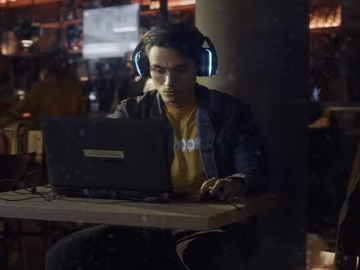 The spot, dubbed “Into the Spotlight,” opens with people in a coffee shop whose attention is on the breaking news announcing that “multiple witnesses have reported mysterious shadow sightings all around the city” and that, “according to experts, the origin of these shadows is still unclear.” As the voiceover spreads the news, the people inside start looking through the window, into the darkness, where mysterious characters from the world of gaming (a nod to the brand’s partnership with ESL) are showing up.

“Time to enter the spotlight. Rise on. ” onscreen lines read at the end of the video clip, which fans of the game Dota 2 were able to see this year at ESL One Hamburg.

The Mercedes-Benz EQC, featuring a combined electrical consumption of 20.8-19.7 kWh/100 km, combined CO2 emissions of 0 g/km), represents, according to the automaker, “the departure into a new era of mobility”.

When the partnership between Mercedes-Benz and the ESL started, two years ago, the Stuttgart brand established the Mercedes-Benz Most Valuable Player (MVP), a format in which the fans and a jury of experts determine the best player in the tournament via an online poll. The MVP, awarded at the ESL One Hamburg by a cosplayer, receives a new Mercedes‑Benz worth 50,000 euros.

“For us the eSports community is a very exciting target group with a high affinity to future mobility”, Bettina Fetzer, Mercedes-Benz marketing manager, said in a press statement, adding “That’s why we are really looking forward to ESL One Hamburg this year, as well as to the fans’ enthusiasm and the Mercedes-Benz MVP award.”