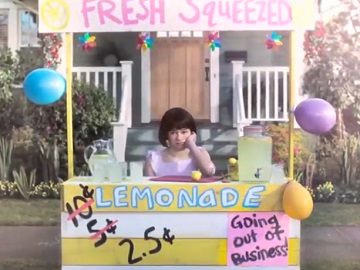 E-commerce company Mercari advertises its selling app in a new commercial, highlighting that, with Mercari, anyone can sell.

The 60-second spot features a woman who admits that selling has never been her thing. As a child, she tried selling lemonade but went out of business, as a grown-up she held a garage sale, but it turned out selling still wasn’t her thing, and when online sale came along, she tried that, too, but an awckaward meeting with a guy who refused to buy her waffle maker because of a stupid reason, made her give up. Well, not for ever because she then discovered the selling app Mercari, which allowed her to sell her unnecessary belongings easily and hassle-free. “You just take a few pics, add a description, and boom – it’s listed,” she says, mentioning that “Mercari’s got millions of buyers nationwide so stuff really sells and the best part – everything ships”.

“With Mercari, anyone can sell, even me,” the woman says at the end of the ad, which also sees the voiceover encouraging people to sell the items they don’t use, ship them, and get paid with Mercari The Selling App.

Founded in February 2013 by Shintaro Yamada, a Japanese serial entrepreneur, and currently operating in Japan, the United States, and the United Kingdom, Mercari is a company whose main product is the Mercari marketplace app, which allows users to buy and sell items quickly from their smartphones. In 2017, it was awarded “Best Commercial” for “The Bride” at the LA Film Awards.