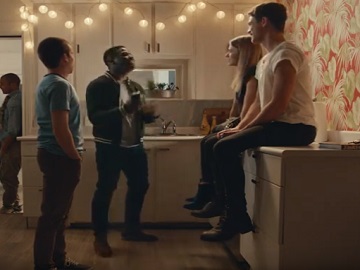 The campaign, from agency BBH London, includes two spots directed by Jeff Low that debuted on TV and online in October 2018 in several countries across Europe, including Belgium, the UK, and the Netherlands, and South Africa. While one of them features a guy who’s left alone with his girlfriend’s dad for the first time, the other features a guy who’s stuck with strangers at a house party.

This last ad opens with the voiceover saying that Mentos Pure Fresh Gum, with a burst of freshness, can help you small talk, and goes on with a guest at a house party who doesn’t know what to say to the young couple in front of him. The other guy, opening a pack of Mentos Pure Fresh Gum, grabs a gum, gives one to the shy interlocutor, and breaks the silence by saying something about the wallpaper.

At the end of the commercial, the sung tagline “Who says no to Mentos Gum?” is heard.