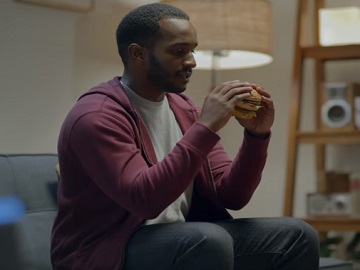 McDonald’s advertises its new limited-time Big Mac with Bacon in a new commercial.

The ad features a guy in his living room who holds a Big Mac Bacon and says that crispy Applewood smoked bacon is the best thing to happen to McDonald’s classic Big Mac. His voice-activated speaker placed on a nearby table answers that it’s the other way around, stating that the Big Mac is clearly the best thing to ever happen to the bacon. “Yeah, well, bacon has done just fine without the Big Mac,” replies the man, continuing the debate. “Without the Big Mac, would bacon even exist?” asks the voice assistant, turning then off all the lights and leaving the guy, named Steve, who says it would, in the dark.

This is not the first ad featuring this kind of debate. Taiwanese American singer Amber Liu and YouTube star Mike Bow co-star in a recent spot, trying to settle the debate in an unexpected way – through a dance-off. The fast-food restaurant chain invites you to try for yourself and decide which team you are – Team Bacon or Team Classics.