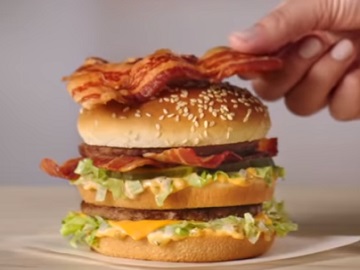 McDonald’s has released a new commercial, promoting the Bacon Hour, which will give customers the chance to get free bacon on the side with any menu item for one full hour at participating restaurants.

“Bacon is coming to McDonald’s Classics. Because people love bacon. So we’re celebrating with even more bacon. Introducing Bacon Hour – one hour from 4 to 5 PM local time (on January 29th, 2019), to get free bacon with anything,” the voiceover says on the 35-second ad, which features the Big Mac Bacon, Quarter Pounder Bacon and Cheesy Bacon Fries, as well as other menu items that you can pair with bacon, such as the Filet-O-Fish, Apple Pie, Hash Browns, Oreo McFlurry, Chicken McNuggets, and more.

The spot also includes footage of people from across the country saying or shouting the word “Bacon”. At the end, actually, a man is seen in his car, delivering a message to the fast-food chain: “Mickey D’s, I know it’s a limited time only, but you might want keep it around!”.