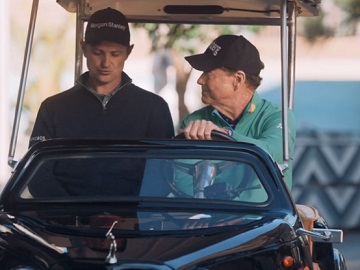 Mastercard highlights that “You’re a tap away from making someone’s day” in a new commercial starring Tom Watson and Justin Rose.

This time, the two golfers see something special when they head off the course. Stopped in front of a clothing and accessories store, they witness the moment a man pays contactless with his Mastercard for a scarf that his wife loved but didn’t want to buy. The catch is that he did this while she turned her back just for a few moments, to reply to a text message, and he quickly hid the purchase in her shopping bag, without revealing what he had just done and making it a surprise. “Wow, real nice,” “That was a thing of beauty,” Watson and Rose exclaim, referring to the scene they’d just watched. “That’s what you’d call ‘Chip In'”, Watson says, before realizing they ran out of juice and they need to push the cart.

The commercial ends with the onscreen line “You’re a tap away from making someone’s day” and with the voiceover saying “Tap with your Mastercard – the simple, secure way to pay” and “Start Something Priceless”.

This is only the latest installment in the company’s “Start Something Priceless” campaign featuring the two professional golf players. Mastercard has also enlisted Camila Cabello to remind people that every day is a chance to make someone’s day. Earlier this year, the singer appeared in a commercial that featured her walking down the streets of New York and making priceless surprises to various people on her way.