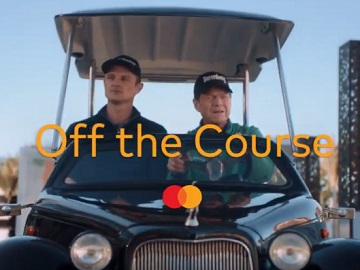 PGA TOUR golf professionals Tom Watson and Justin Rose co-star in a new commercial for Mastercard, aimed at highlighting how easy it is to pay with Mastercard.

The 30-second spot, part of the “Tom and Justin Off the Course” series and dubbed “Play Through,” features the duo witnessing an embarrassing moment for a man who’s having trouble paying for a bottle of water at a vending machine with cash and allowing two ladies to make their purchase first. “This guy’s got to get off the green,” Rose tells his fellow, who adds that he’s “letting them play through”. When one of the ladies, who seems to be in her 60s, pays with just a tap with Mastercard, Rose can’t help but say “Nice touch!” As the spot ends, viewers get to see that the respective lady has actually paid for the man’s bottle of water.

“You’re a tap away from making someone’s day,” an onscreen line reads at the end of the commercial, which also features Watson and Rose asking themselves why they can get out of that place at the wheel of their golf cart. Eventually, the voiceover urges viewers to tap with Mastercard, described as “the simple, secure way to pay” and “Start Something Priceless”.

Watson and Rose filmed the ads for Mastercard’s new campaign earlier this year, in January, at Westfield UTC mall. The technology company in the global payments industry, which has been a partner of the PGA TOUR for more than 20 years and has recently debuted its new sonic brand identity, will give participants at the 2019 Arnold Palmer Invitational presented by Mastercard in Orlando, Fla (which began Thursday, March 7, on Golf Channel), the chance to experience the brand’s new sound throughout Bay Hill Club & Lodge from the moment they enter the grounds to when they pay with a Mastercard at select concessions. Thus, cardholders and golf fans will get to the sounds of Mastercard first-hand, will be able to speed through lines and back out on the course by paying at concessions and in the merchandise shops on-site with just a tap, and – in addition – may get a Priceless Surprise. A meeting with PGA TOUR professionals is among the Priceless Surprises.