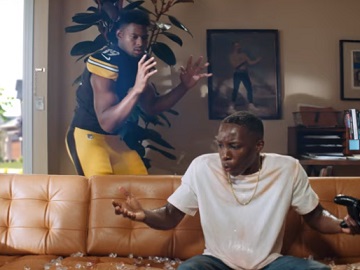 The ad campaign for EA Sports’ Madden NFL 20 video game continues with a series of new spots, that illustrate in a humorous light-hearted way the new game modes.

One of the spots, dubbed “Victory Bath,” features JuJu Smith-Schuster showing up in the living room of a young video gamer who’s getting ready to start his virtual football career at USC and emptying a bucket full of Gatorade on his head, telling him he can drink his shirt if he gets thirsty.

Other commercials, created by agency Johannes Leonardo, feature Kansas City Chiefs quarterback Patrick Mahomes having his arm upgraded, New Orleans running back Alvin Kamara being taken by a videogamer’s rival after he won in Superstar KO, and Kamara and JuJu Smith-Schuster standing behind a gamer and telling him what facial features to choose for his custom player.

The franchise had, with the official launch of the Madden NFL 20, the highest final week of pre-orders in its history. Now, customers can get up to 20% off the Madden NFL 20 Superstar & Ultimate Superstar Editions and from September 5th through September 8th they can play the game for free as part of the Free to Play Weekend.