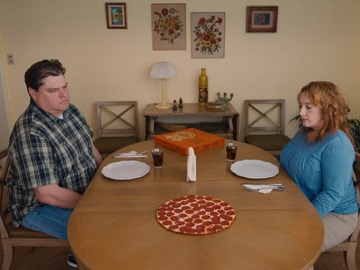 Little Caesars promotes its new limited-time deal on the Hot-N-Ready Thin Crust Pepperoni Pizza in a commercial featuring a couple as they discover that there actually is a crispy crust underneath all that pepperoni and cheese.

The 30-second ad shows the woman slamming the side of her face onto her dining table to get a better look at the pizza’s profile and checking if, beneath the layers of pepperoni and cheese, there is a crust. “This new Little Caesars Thin Crust Pizza is soo loaded with pepperoni and cheese, I don’t believe there is anything crust.

At the end of the commercial, the voiceover urges viewers to pick up the most cheese and pepperoni they can fit on a large thin crust pizza for the nation’s best price of just $6.