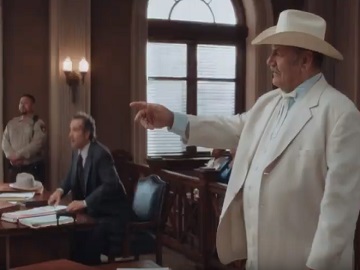 Little Caesars Pizza advertises its Bacon Wrapped Deep! Deep! Dish in a new commercial, highlighting that this menu item is still a pizza, even if it’s wrapped in 3.5 feet of bacon.

The 30-second ad features actor Dave Parke reprising his role as a small town pizza lawyer in the courtroom, pleading that the Bacon Wrapped Deep! Deep! Dish is still a pizza, even if it’s wrapped in over 3.5 feet of bacon. The other lawyer objects, saying that all he sees is “bacon, bacon, bacon” and asking “Where is pizza?”, which makes the typist point to the meal and shout “It’s right there!” The judge stands up and concludes that, “if there’s one thing he knows, is pizza” and “that’s a pizza”. A woman from the jury also stands up, adding “With a bunch of bacon on it”.

The commercial ends with the voiceover urging viewers to get a Little Caesars Large Bacon Wrapped Deep!Deep! Dish Pizza for just $12. Onscreen lines inform that the offer is valid for a limited time only, at participating locations and that prices are higher in AK, HL and in some CA locations.

Dave Parke starred in another commercial, in the past, for the pizza chain, as one small town pizza lawyer who decided that the pizza wrapped in over three feet of bacon is perfectly legal.