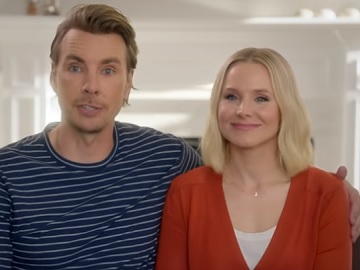 Lightlife has enlisted Kristen Bell and Dax Shepard to promote its plant-based burgers in a hilarious commercial.

The almost 2-minute ad, titled “A Taste of Honesty,” features Bell and Shepard as a couple and parents of three, who share their parenting approach with viewers, revealing that what works for them is honesty. They are then seen dealing a variety of situations with “brutal” honesty – they tell their little daughter that the fish she’s watching is not sleeping but is dead and they are flushing it down the toilet, they also have a long conversation with another daughter about what happens when mummy and daddy “consensually agree to a romantic encounter,” even using drawings and post-its to present in detail sexuality-related topics, the father tells his son that he’s hiding in a closet sometimes to get away from them and that the kids are let to win because they are not good at the game.

Bell and Shepard also say that the hardest moments are around dinners, but since they discovered Lightlife things changed. Asked by their kids how the Lightlife plant-based burgers are, they answer that “they taste just like regular burgers, but they’re made from plants” and they’re delicious and, thanks to the fact they’re always honest with the little ones, they are believed.

The commercial ends with the voiceover saying “Lightlife – the plant-based burger that tastes so good you don’t have to lie about it being plant-based” and urging viewers to share their own brutally honest parenting truths using #ATasteOfHonesty.

The Lightlife range also includes plant-based ground, which is gluten and soy-free, has no GMOs, no artificial flavors, and 20grams of protein per serving, just like the plant-based burger.