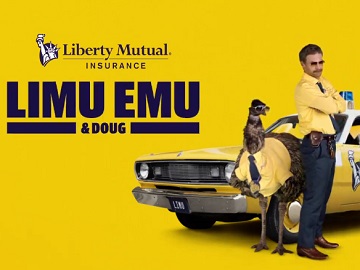 Liberty Mutual has released a new commercial featuring LiMu Emu and Doug. This time, the two buddy-cop partners pull out all the stops to ensure a civilian who’s buying a new car only pays for what she needs.

The 30-second ad shows LiMu Emu and Doug in their yellow car with the insurance company’s logo on it, spotting a woman in front of a dealership, intended to buy a new car. Being stuck in traffic, they get out of the car and start running toward the dealership to inform the customer that Liberty Mutual could save her money by customizing her car insurance so she could only pay for what she needs. “Oh, yeah, I’ve been a customer for years,” answers the woman, which makes Doug and LiMu to return to their car just like they came, rushing.

Doug and his feathered partner co-star in other spots, as well, sharing the information about Liberty Mutual’s customized coverage. In one of them, while Doug shares customization tips with a young couple on the sidewalk, LiMu Emu encounters an unexpected adversary in his own reflection. In another one, Doug concludes – after looking at the pictures of completely different people stuck on his clue board – that they need customized car insurance from Liberty Mutual so that they could only pay for what need, and save money, as well.

The spots are part of Boston-based company’s new national ad campaign, developed by creative agency Goodby Silverstein & Partners (GS&P) and set to run across on a variety of national network and cable properties, social, digital, as well as other channels. They were all directed by award-winning Australian director Craig Gillespie, best known for his films Lars and the Real Girl and I, Tonya. LiMu Emu was brought to life with the help of visual effects and content creation studio The Mill, which used cutting-edge CGI technology, including a proprietary fur and feather system.