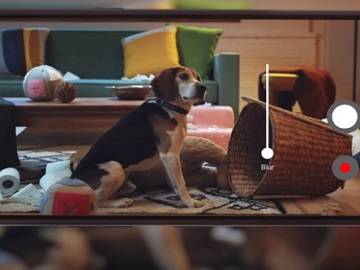 LG Mobile shows, in a new LG V50 ThinQ ad, how the phone’s Video Depth Control feature highlights a moving subject by softening the background, so you can focus on your puppy, not the mess he made.

The 10-second spot opens with someone typing the text “Bringing bokeh effects in my video” in a browser, while a dog is seen searching for something in the laundry basket. It is then illustrated how to apply depth control while recording your video and have the “protagonist” taking the center stage rather than the chaos behind him.

This is only the latest installment in a series called “Life Hacks,” that presents the various features of the brand’s new flagship smartphone. A previous commercial highlighted that, thanks to the Dual Screen and Dual Video Call feature, you can now chat with multiple friends without missing their presence and experience, thus, a double dose of excitement and closeness.

The LG V50 ThinQ is available in New Aurora Black shade and is priced at about 950 Euro.