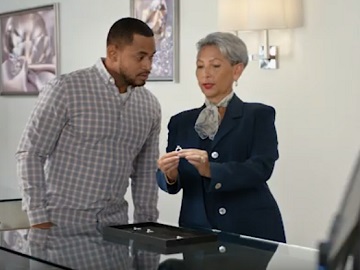 Letgo, the mobile app that allows users to buy and sell used goods locally, has released a series of new ads, encouraging people to sell the stuff they don’t need anymore.

One of the spots features a young man interested in buying an engagement ring for his girlfriend. After deciding on the ring to buy, he rushes out and comes back at the wheel of a red pickup truck, which he drives through the store window, to the surprise of the lady who expected to see him taking out his wallet. “What, you don’t accept truck?” he asks, a little bit surprised that he can’t trade the car for the ring. The sales representative advises him to sell the vehicle on letgo, which he does, paying for the ring with money.

“Less stuff, more living,” an onscreen line reads at the end of the spot, which also sees the guy apologizing for almost having hit the lady with the car. “Live and letgo,” the voiceover finally adds.

Other similar ads launched by Letgo feature a family pushing a baby grand piano into the reception of a hotel, willing to use it as a payment for their stay, and a guy trying to pay for the next round of his friends in a bar with a lawnmower.

Launched in January 2015 by Alec Oxenford, former CEO of OLX, letgo raised, in the same year, US$100 million and was later labeled as “the biggest and fastest growing app to buy and sell locally”. While it initially targeted the US market, the app launched internationally: in October 2016 it launched in Canada and in November 2016 in Norway.

The company enlisted ad agencies Crispin Porter + Bogusky Miami and CP+B Miami to create ad campaigns for it. As of January 2018, the Letgo app had about 75 million downloads, compared to 30 million in August 2016.