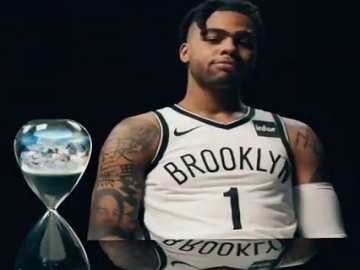 The 30-second spot opens with a waiter asking the Brooklyn Nets player if he would like some “fresh ground pressure” for his pasta. “You said pressure?” asks Russell in return, starting then to daydream about a speedy ride with a car that has “Dr. Presur” on the license plate. The next scenes feature the athlete seeing the word in an eye chart and reading “Veins Too Icy”, his autobiography while lounging on a chaise-long on top of a mountain.
“That’s right. Ice in my veins,” he says, adding that “when pressure is everything, pressure becomes nothing”.

At the end of the commercial, he also adds Kumho Tire’s tagline, “Performance Under Pressure”.

D’Angelo Russell has also starred in commercials for other brands, as well, in the past. In a 2016 Foot Locker ad, for instance, he pokes fun at himself. In 2017, he appeared in a Gatorade commercial, promoting the company’s Flow Thirst Quencher.