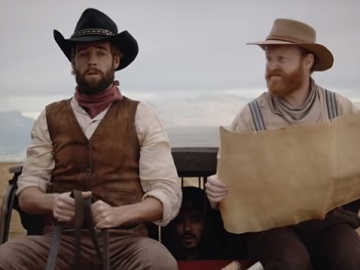 KitKat Australia has released a new commercial, encouraging people to have a break and have a KitKat.

The 15-second spot features two men in the Wild West, in a carriage, at the edge of an abyss, looking at a map. Well, actually, only one of them is looking at the map and explains that it says to go straight, which makes the other hopping mad. When the latter grabs the map and tears it, the first man decides to indulge himself with a KitKat. He unwraps the bar, breaks off one of the four crisp wafer fingers, snaps it into two and savours the deliciously smooth milk chocolate in the company of his fellow.

“When you need to snap out of it, have a break, have a KitKat,” says the voiceover at the end of the commercial.

Nestlé KITKAT 4 Finger Milk Chocolate Bar, described as the perfect snack for those who want to get the most out of their break, is made – according to the brand, from Nestlé Cocoa Plan sustainably sourced cocoa. The brand also states that this is the ideal snack to have as part of a balanced diet with only 490kj per portion.