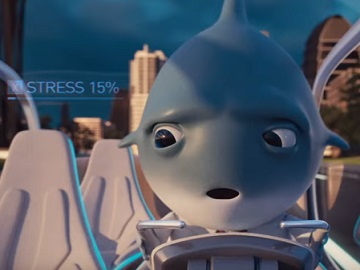 Kia introduced at CES 2018, its R.E.A.D. System, a future mobility technology that deciphers drivers’ emotions and simultaneously optimizes the in-vehicle environment for seamless comfort and pleasure.

The automaker has also released a first installment in a new ad campaign focused on the technologies it envisioned for the future. Titled “Sunfish (Mola Mola),” the episode presents the sunfish as fragile creatures that are easily stressed out. The protagonist gets, actually, very stressed out on his way to work, while driving an autonomous Kia, but luckily the R.E.A.D. System intervenes and calms him down by continuously assessing the driver’s emotional state through detection and analysis of bio signals (facial expression, heart beat, etc.) with the help of AI machine learning and creating a personalized driver’s space in terms of lighting, sound, cabin temperature, seat vibration and scent. Eventually, the autonomous driving mode is also activated, so that the little driver could get back to his senses. “Amplify Your Joy with Emotive Driving” an onscreen line reads at the end of the commercial, which is scored by the 2018 song “Delicate” by Rupert Pope & John Robertson & Eller.

Other technologies from Kia include V-Touch, the world’s first virtual touch-type gesture control technology that enables effortless control of numerous vehicle features with the simple swipe of a finger, technology that is presented in the second installment in the campaign.

Kia’s booth during CES 2019 is #7029, at North Hall, Las Vegas Convention Center. There will be guided docent tours from January 8th through January 11th, six times per day.