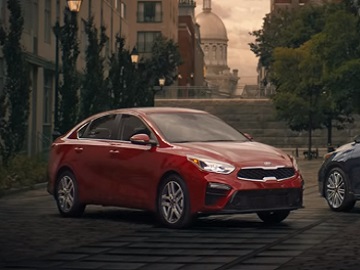 Kia Canada showcases, in its latest commercial the Kia Forte and All-New Forte5 GT, highlighting that this is “A compact, not a compromise”.

“We all make compromises. Maybe it’s trading your sense of direction for a sense of adventure. A sense of pride for a sense of play. Sure, there are places for compromise, but the road is not one of them,” the voiceover says on the 50-second spot, which shows some of the available features on the Forte, such as the UVO Intelligence Remote Start, used by a couple that seem to be lost in the woods, at night, and the UVO Intelligence Remote Horn & Lights, used by a fan after a game to make a group of other fans walking down the street believe there is someone in the car. The ad also informs that the Kia Forte was named Best Small Car in Canada for 2019 and that the all-new Kia Forte 5 features 201HP turbo engine.

“The Kia Forte and the all-new Forte 5 GT, it’s a compact, not a compromise,” the voiceover adds at the end of the commercial, which also sees the tagline “Long Live Surprise” flashing across the screen.