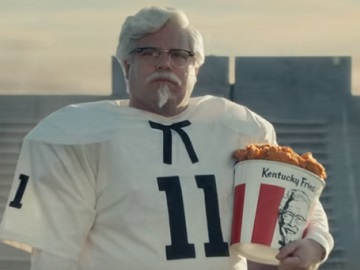 KFC has released a new commercial, informing that Rudy is Colonel Sanders now.

The spot, created by Wieden+Kennedy Portland like a spoof of the original Rudy and titled “Rudy II,” opens with the onscreen line “Sometimes a winner is a dreamer who just won’t quit” and sees Sean Astin reprising the role of his iconic underdog character in what looks like a ’90s movie. “Rudy’s back. But this time he’s got a new dream,” the voiceover says while on screen Rudy is seen spotting a bucket of KFC in the audience while being hoisted on his teammates’ shoulders on the field, at the end of a game.

He then tells his coach that he wants to be Colonel Sanders and the latter, giving him a “chicken” jacket, tells him he was “born to be the Colonel”. Astin is then shown putting on a football uniform with Sanders on the jersey, attaching the gray wig, mustache and glasses, and training hard… to be like Colonel Sanders. Iconic scenes from the movie, like the one when Rudy is lifted up and carried off the field as a hero and the locker room speech are recreated in the ad, which debuted on September 5, ahead of Thursday Night Football.