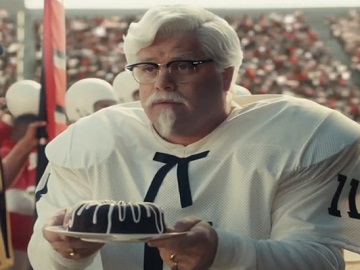 KFC advertises its Free Cake limited-time deal, which gives customers the chance to get a free chocolate cake when purchasing a 10-piece meal, in a new commercial.

The spot features actor Sean Astin as Rudy dressed as Colonel Sanders asking the team’s coach to try his free chocolate cake with a 10-piece meal. Despite the Colonel’s several statements that the cake is given for free, the coach insists he wants to pay for it. “My whole life I’ve paid for chocolate cake,” he says, leaving Rudy, aka the Colonel, speechless.

The fast-food chain has also released a commercial informing that Rudy is now Colonel Sanders. The spot, dubbed “Ruby II,” from agency Wieden+Kennedy Portland, recreates iconic scenes from the original Rudy movie, such as the one when Rudy is lifted up and carried off the field as a hero, and features Rudy’s transformation into the famous Colonel Sanders. Given a “chicken” jacket by his coach, who encourages him and tells him he was born to be the Colonel, Rudy embarks on a mission to do whatever it takes to turn his dream into reality. He is then seen putting on a football uniform with Sanders on the jersey, attaching the gray wig, mustache and glasses, and training hard to become Colonel Sanders.

Previous: ALDI Does She Like Cheese or Chess? Commercial
Next: Madden NFL 20 JuJu Smith-Schuster Commercial