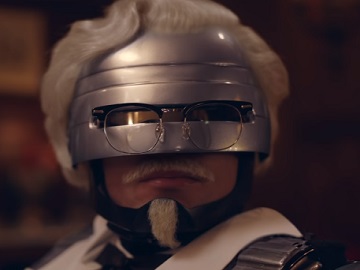 KFC has released a new commercial, introducing Colonel RoboCop and a new tagline, “The Colonel’s secret recipe. You can eat it. But you can’t know it”.

The 30-second ad features a group of people around a table filled with KFC menu items. The Colonel RoboCop, who’s sitting at the head of the table, is asked by one of the guests about the secret recipe for his delicious Kentucky Fried Chicken, which makes him give a famous movie line: “If I told you, I’d have to kill you”. For a few seconds, silence prevails as a reaction of shock gets everyone at he table and only a robotic stirring sound is heard. However, when The Colonel utters a “Ha Ha Ha Ha,” they start laughing and even applauding.

“The Colonel’s secret recipe. You can eat it. But you can’t know it,” the voiceover says at the end of the commercial, which also sees the Colonel suddenly stopping from laughing and putting on a serious face.

According to a press release, Colonel RoboCop isn’t just tasked with being the latest face of KFC’s famous fried chicken, but he was also commissioned to successfully transport an encrypted copy of the secret blend of 11 herbs and spices used to make the world famous Original Recipe chicken to a nuclear-proof location – the Bahnhof maximum security nuclear bunker located in Stockholm, Sweden.

Invented by KFC Founder Colonel Harland Sanders and perfected in 1940 after years of experimentation, the secret recipe, which blends the iconic 11 herbs and spices, has been carefully guarded at KFC headquarters in a state-of-the-art vault surrounded by motion detectors, cameras and more, becoming one the world’s best-kept trade secrets.