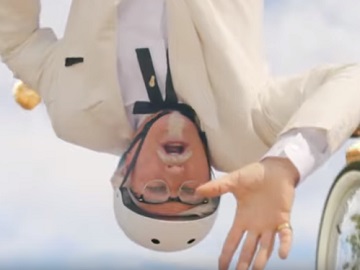 KFC advertises its new Cinnabon Dessert Biscuits in a hilarious commercial, that nods at the origins of this sweet menu addition.

The 30-second spot features The Colonel riding a bike with a box of KFC biscuits in his hands as he has a collision with a guy on roller skates, who was delivering a box of Cinnabon glazed donuts. Their fender bender resulted in the KFC biscuits getting a top of cinnamon brown sugar glaze and cream cheese frosting, which is now available at KFC as Cinnabon Dessert Biscuits.

The Colonel says he’ll never forget that “fateful day,” when an easily avoidable accident transformed his KFC biscuits into his most delicious creation yet, and informs that new Cinnabon Dessert Biscuits are free with with any 10-piece meal.

KFC announced that the new Cinnabon Dessert Biscuits will be available from April 29 through June 30 for $1 per biscuit or $3 for a pack of four.

The Louisville, Ky.-based chicken chain has enlisted Chippendales dancers to celebrate the new menu addition and provide personalized videos for Mother’s Day. Customers can go to chickendales.com, where they can select their mom’s name, the state she lives in, and then download the video or share via social channels.