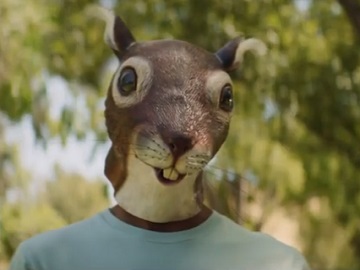 Peanut butter brand Jif has released two new ads to show the things people would do for its peanut butter.

The spots, which mark the first work of agency Publicis since it was awarded creative and media for the brand last year, are part of a campaign titled “That Jif’ing Good”. One of them features a curly-haired woman sitting on a bench in the park and spreading some Jif Peanut Butter on a slice of bread. Soon, she finds herself surrounded by dozens of squirrels willing to get a bite. However, toward the end of the video, it turns out there is also a “human squirrel” that wants to receive a piece of bread with Jif Peanut Butter on it – it is actually a man who put on a squirrel mask in his attempt to convince the young lady to share her treat. But judging by the look on her face, he didn’t make a good decision.

“Jif Peanut Butter. It’s That Jif’ing Good you’d dress up like a squirrel for it,” the voiceover says at the end of the commercial, which debuted this week on NBC’s The Today Show.

The other commercial, aimed at highlighting that the Jif Peanut Butter is “That Jif’ing Good you’d brave the Apocalypse for it,” features a woman who, after taking shelter in a bunker where there is only a no-name peanut butter, decides to go back outside and indulge herself with some Jif Peanut Butter in the remains of a grocery store.