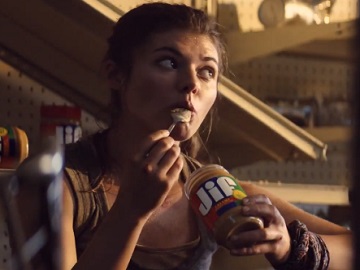 Jif Peanut Butter has launched a new ad campaign, created by Publicis and titled “That Jif’ing Good,” aimed at highlighting that the Jif Peanut Butter is so good people would go absurd lengths for it.

One of the spots, set in an apocalyptic world, invaded by aliens, features a woman running across a field and taking cover in a bunker, together with several other people. Noticing the jars of peanut butter placed on a shelf, she decides to go back outside and indulge herself with the Jif peanut butter.

“That Jif’ing Good you’d brave the Apocalypse for it,” an onscreen line reads at the end of the commercial.

A second spot, also created by Publicis, the agency that took over creative and media for Jif Peanut Butter and sister jelly brand Smucker’s, features a man who dressed up like a squirrel to get some Jif Peanut Butter from a young woman who’s eating it in the park.

“Squirrel” debuted on NBC’s The Today Show on NBC and “Bunker” is set to premiere on Sunday, September 8, across several NFL regular season kick-off games. The 60-second version of Bunker will air during the September 16 premiere of Dancing with the Stars.