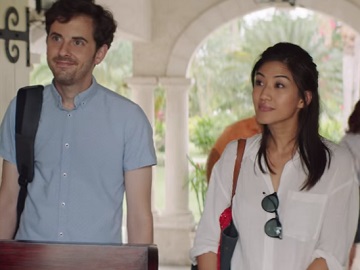 American low-cost airline JetBlue highlights, in a new ad, that with the JetBlue Plus Card you’ll fly faster than you think and invites you to see what happens when a young man earns the points to go on a romantic Barbados vacation faster than expected.

The 30-second spot, dubbed “Friend Zone,” features the guy, named Dave, on a date with a young woman. “He always wanted to go on a romantic Barbados vacation, but with the JetBlue Plus Card he got there faster than he could define his relationship,” according to the voiceover. Dave is then seen at the reception of a hotel, in the company of his date, asking for different things. While he says he wants one room, the woman answers she wants two, and then, when he rectifies his answer to meet her wish, she changes her mind, asking for one room, which obviously leads to confusion for the lady at the reception. As they spend their days on the sunny island, various awkward moments happen. They put sunscreen on their own back, without helping each other and they don’t have tender moments, despite his intentions.

The end of the video sees Dave and his partner in a restaurant, waiting for their dinner order and watching a couple kissing passionately at a nearby table. While she is obviously not impressed by the display of affection, he hopes that if, he unbuttons his shirt like the other guy, might impress her.

“Fly faster than you think. Get 6x points on JetBlue purchases, 2x points at restaurants and grocery stores and 1x on all other purchases. The JetBlue Plus Card,” the voiceover says at the end of the commercial.