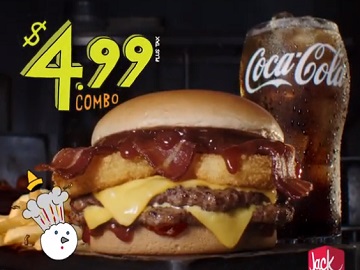 Jack in the Box invites people to try the $4.99 BBQ Bacon Double Cheeseburger Combo in a new commercial, created like a GIF.

The 15-second spot, aimed at highlighting that this BBQ Bacon Double Cheeseburger is “eye-popping, jaw-dropping, mouth-melting deliciousness,” showcases the ingredients that make it that way, namely three sizzling half strips of bacon, two crisp, fried onion rings, two juicy patties, and BBQ sauce, all on a toasted plain bun.

The new combo, also including a side of small fries and small drink, is sold along another menu addition: Donut Holes, which feature a bit-sized donut hole served hot and topped with cinnamon sugar. The suggested price for four Donut Holes is set at $1.