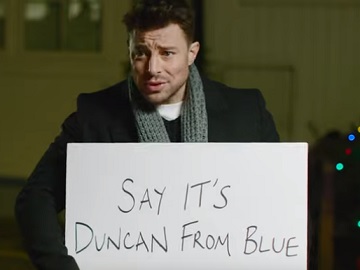 Innocent Drinks, a British company that makes smoothies and juice sold in supermarkets, coffee shops and various other outlets, has enlisted Duncan James from Blue to promote its new blue smoothie, “Bolt from the Blue”.

The boy band singer stars in a Love Actually-inspired spot and delivers an important message through posters while in the background a Christmas carol is playing. Standing on the doorstep of a blonde woman and pretending to be a carol singer, he shows what he wrote: “Say it’s Duncan from Blue. Let me say without hope or agenda. Just because it’s Christmas (and I’m being paid to say this). To me, this drink is…. (Bolt from the Blue). Not green. It’s…. Blue actually. Hopefully, next year I’ll be working with brands like these (at this point, pictures pasted on the flyer make reference to brands of jewelry, luxury watches, cars, fragrances and more). But for now I’m stuck with this lot. And my beautiful face will continue to advertise blue drinks. Until my bank balance doesn’t look like this (Picture of value -£17.64 is shown). Merry Christmas. PS. I’m available for work throughout 2020. To book me please email duncanfromblue@innocentdrinks.co.uk.” He then waves her goodbye and leaves. Shortly after, the blonde woman, who got really bored during the “communication process,” runs after him and asks him “Aren’t you in Westlife?” which makes Duncan to throw away the posters.

Earlier this year, in August, Duncan James joined a debate on Twitter regarding the color of this new drink, of which many people have said that is actually green, tweeting “It’s BLUE! End off!!!” He was then tapped to promote the drink and appeared in another commercial for the drink, which is made from apple, lime, guava and coconut water.