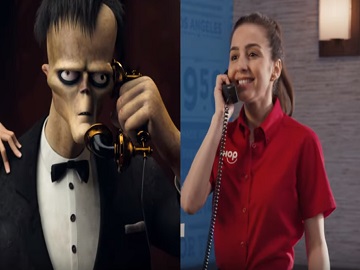 IHOP advertises its new Addams Family menu and the return of its Kids Eat Free offer in a hilarious new commercial, that also urges people to watch MGM’s forthcoming animated film The Addams Family in theaters.

The spot, dubbed “Addams Family Outing,” features Gomez Addams calling an IHOP restaurant and learning from the girl who answers the phone that they have the new Addams Family menu, with Wednesday’s web cakes and haunted hot chocolate, and that, for a limited time, kids eat free, which makes them decide to get in the car and go to the closest IHOP.