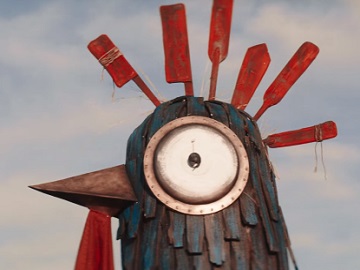 IHOP advertises its new Buttermilk Crispy Chicken and Pancakes, now available for only $6.99, in a hilarious new commercial, inspired by the trojan horse.

The 50-second ad, entitled “The Trojan Chicken,” features a group of men hiding in a huge wooden chicken, with IHOP menu items in front of them, wondering about the reason why they are sneaking into the city when they could be at IHOP eating more crispy chicken. Two soldiers marching in front of the gate, close to the chicken-shaped device, ask the giant chicken if IHOP really has crispy chicken. After a second of panic, one of the men inside the chicken confirms the news, in a chicken voice, mentioning that “it’s a new buttermilk recipe made with all-natural chicken breast”. “We’re talking chicken sandwiches, chicken and waffles, chicken and pancakes,” the man also says, making one of the soldiers get on the back of the chicken and, riding it as if it was a horse, order to go to IHOP.

At the end of the commercial, the voiceover highlights that the new Chicken and Pancakes are only $6.99 at IHOP.

The offer is valid for a limited time only. Price and participation varies.

Brad Haley, Chief Marketing Officer at IHOP, said in a press release that the chain’s new Crispy Buttermilk Chicken menu “was developed with both quality and taste in mind, featuring all-natural chicken breasts and breast strips that are dipped in our proprietary Buttermilk batter and perfectly seasoned breading before being fried to a crispy, golden brown that’s still juicy on the inside”.