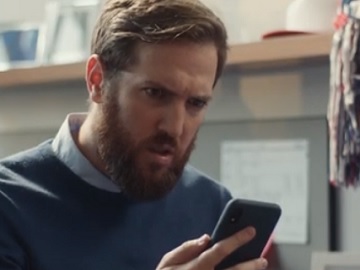 One of the spots, aimed at highlighting that, when it’s time to drop your favorite player, your heart can often rule your head, informs that IBM Watson analyzes millions of fantasy sources to help make sure love doesn’t affect your lineup.

“In fantasy football, blind loyalty is a problem,” the voiceover says in the opening of the 15-second ad, which features a man at the office, watching a video of himself, shocked of his own behavior – with his face painted in his favorite team’s colors – red and blue – and wearing his favorite team’s jersey, he’s immortalized yelling from the top of his lungs, in the company of other football fans.

“That’s why IBM Watson analyzes millions of football sources, so your love doesn’t hurt your lineup,” the voiceover adds at the end of the spot.

The other spots also tackle other problems existing in fantasy football, such as favoritism, indecision, and injuries, and show how IBM Watson can help by analyzing the hard facts, millions of expert football sources, including Mike Greenberg and Stephania Bell, to give smart, useful insights on every player and more.