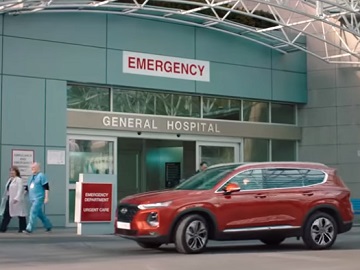 Hyundai Canada showcases the all-new Santa Fe and some of its SmartSense driver assistance technologies in a new commercial.

The 60-second spot features a young man who drives his pregnant wife to the hospital to give birth to their baby. From the moment he gets in the car, the all-new Santa Fe, he encounters all kinds of challenges, but luckily the driver assistance technologies help alert him to and even avoid unexpected dangers on the road. Thanks to the rearview camera, he doesn’t hit the vehicle that passes on the street when he goes in reverse, exiting the garage, thanks to the Blind Spot monitoring system he manages to avoid an incident while driving, and finally, when he gets to the hospital and manages to lock his wife and her mother in the car, the Rear Occupant Alert system reminds him that he forgot something in the back seat.

The Rear Occupant Alert system is a new innovation that helps prevent passengers from being left behind by using ultrasonic sensors to detect rear seat movement and alerting you with audible cues, visual cues, and even direct messaging to your smartphone with a BlueLink subscription.

The 2019 Santa Fe, starting from $28,999, was named a Top Safety Pick by IIHS this year, when equipped with available Forward Collision-Avoidance Assist and LED headlights.